This is a demonstration of using descriptive statistics (using graphs and numerical summaries) to make sense of a one-variable data set (the seasonal rainfall data in Los Angeles). The techniques we use are frequency distribution, histogram, and various numerical summaries. The focus here is not the technical how-to for constructing the graphs and the calculation of the numerical summaries. The focus is on the narrative on using these techniques to make sense of the data. If there is any question about any of the techniques, see [1] or your favorite introductory statistics textbook (or Google). The histograms and the calculation are done in an Excel spreadsheet. At the end of the post, a data set for rainfall in Everett, Washington will be given as exercise.

We are interested in analyzing the seasonal rainfall measurements (in inches). With only 3.21 inches of rain, the season 2006-2007 was a drought season (in fact, the dryest season in the the 132-year period represented in the data). But the season just a couple of years earlier (2004-2005) was the second wettest season in the same 132-year period. So we see that there is a great deal of variability in the Los Angeles rainfall data from season to season and from year to year. However, the raw data provide little information other than simple observations such as the one we just make. We need ways of converting the raw data into useful information. The main ways of summarizing a data set are through looking at graphs and using numerical summaries. Such methodologies are grouped under a statistical approach called descriptive statistics.

The graph we use to summarize the LA rainfall data here is a histogram. Before we summarize the data, it will be helpful to order the data from smallest to the largest. The following shows the Los Angeles rainfall data sorted in ascending order (displayed from left to right and top to bottom). The sorted data will be useful in constructing the frequency distribution.

Frequency Distributions and Histograms
The first step in constructing a histogram is to organize the data into a frequency distribution, i.e., to break the range of the data into classes (or intervals) and count how many data elements are in each class. For example, the Los Angeles rainfall data range from 3.21 inches to 38.18 inches. So we can break this range into 0 to 4.99 inches, 5 to 9.99 inches, 10 to 14.99 inches and progressing all the way to 35 to 39.99 inches. We then do a tally and obtain a frequency distribution. For example, three rain seasons belong to the class 0 to 4.99. The rainfall data for the next thirty two seasons are between 5 inches and 9.99 inches, and so on. The following shows the resulting frequency distribution. 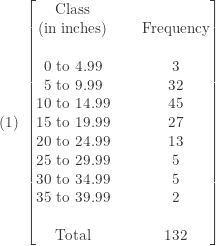 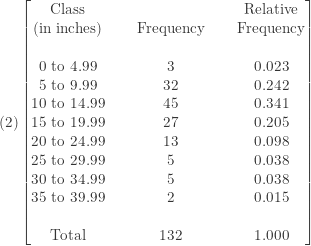 To further help see the overall pattern of the data, we construct two histograms, one based on the frequency distribution in

and the other one based on the relative frequency distribution in

The Center. The center refers to the “average” of the distribution. There are more than one notion of average. For now, we focus on the median (the middle data value when the data are sorted). The median in this case is in between the 66th data value (13.07 inches) and 67th data value (13.13 inches). These are the two middle values of the data and the median is the middle of these two values, which is 13.1 inches. More about the measures of center will follow in the next section.

The Spread. The spread refers to the numerical summaries that indicate the degree of variability or dispersion, indicating how spread out the data are. For now, we use the range, which is the difference between the lowest data value and the highest data value. Taking the difference between the maximum and the minimum produces 34.97 (=38.18-3.21). The range of 34.97 tells us that all the data values varies within an interval of length 34.97 inches. Of course, the wider the range, the larger the degree of dispersion. The range is actually a very crude measure of spread. A more in depth discussion will follow in the next section.

The Outliers. An outlier is a data point that falls outside the overall pattern (graphically as indicated by the histogram or the frequency distribution). There does not seem to be any data values that stand apart from the overall distribution. We conclude that there is no outlier in the LA rainfall data. There is a rule (called the 1.5 X IQR rule) for identifying outliers that does not depend solely on visual inspection of graphs. However this rule is only a guideline. See [1] or your favorite statistics textbook for more information about the 1.5 X IQR rule.

For the LA rainfall data, we consider the following numerical summaries:

are measures of center. A measure of center is a numerical summary that attempts to describe what a typical data value might look like. These are “average” value or representative value of the data distribution.

are measures of spread. A measure of spread is a numerical summary that describes the degree to which the data are spread out. So all four numerical summaries – range, standard deviation, 5-number summary and inter-quartile range (IQR) – measure the degree of dispersion in the data.

Spread – the Range
The range, is defined as the difference between the maximum and the minimum in the data and is a crude measure of spread (see the figure below). It is not a reliable measure (since it can be subject to distortion by outliers) and will not be discussed further.

For any reasonably symmetric distribution that has no outliers, mean and standard deviation are better measures of center and spread, respectively. For skewed distributions, we should not use mean and standard deviations and should use measures such as median and IQR (or 5-number summary). For a skewed distribution, the median is a more reliable indication of what a typical data value look like. This is because the median is less likely to be affected by extreme data values. Because the median and the IQR are measures of position, they are more likely to be able to resist the influence of extreme data values (thus they are called resistant measures). For a more in depth discussion of resistant measures, see this post.

For the LA rainfall data, the preferred numerical summaries are: center = 13.1 inces (median) and spread = 9.68 inches (IQR). See the figure below.

Exercise
The following is a table containing the annual rainfall data (in inches) in Everett, Washington from 1949 to 2005, recorded at the Everett Junior College. The data are obtained from the Western Regional Climate Center. The rain seasons are on a calendar year basis. Perform the same analysis using this data set.

We recommend performation the numerical calculations using software (e.g. TI83 plus or Excel). By following the narrative provided here, the histograms and frequency distribution can be performed by hand. For any questions on techniques and concepts, see [1] or your favorite textbook (or Google).