When Bill Gates Walks into a Bar

In order to make the distinction between mean and median crystal clear, let’s look at a hypothetical example. Let’s say there are 10 middle-class people sitting in a bar. Then the person with the highest income leaves and Bill Gates walks in.

This example points to a very important concept called resistant measure (or resistant numerical summaries). To further make this notion clear, let’s say the following represents the annual income of the 10 people prior to the arrival of Bill Gates. 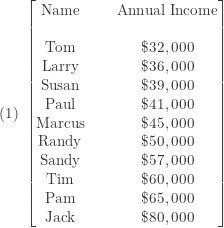 The income data in table

are already sorted. The total income of the group is $505,000, leading to a mean income of $50,500. There is no middle data value. So we take the middle two data values ($45,000 and $50,000 from Marcus and Randy, respectively). Averaging these gives the median income of $47,500. Suppose Jack (the highest income earner in the group) leaves and Bill Gates walks in. Then we have the following income information. 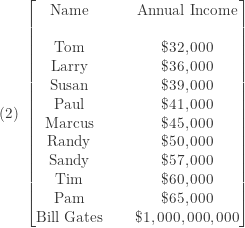 Most people would agree that $47,500 is a better reflection of the income amounts for the people sitting in the bar and that the amount of $100 millions has nothing to do with the reality of the 9 people in the bar who are not Bill Gates. It is hard to argue that the mean annual income of $100 million dollars is a good indication of the financial well being of the people sitting in the bar.

The preceding discussion leads us to an interesting and useful observation.

Which Spread Should We Use?
A related question is about the spread. We consider two measures of spread, the standard deviation and the inter-quartile range (IQR).

The Bill Gates example points out that the inter-quartile range (IQR) is a resistant measure. Note that IQR is a measure of position (defined as the distance between the first quartile and the third quartile).

4 Responses to When Bill Gates Walks into a Bar