In a previous post, we had an elementary look at the seasonal rainfall data in Los Angeles, California, using graphs (histograms) and numerical summaries to describe the data. The rainfall data were collected over time (total rainfall in inches over 132 fiscal years). So it is a good idea to plot the data according to time (the histograms in the previous post ignored the time order). In this post, we present a time plot of the LA rainfall data. The advantage of such a plot is that it can display changes in rainfall pattern over time, revealing trends in rainfall (or the lack of).

A time plot of a data distribution is a graph that plots each data value against the time at which the data value was measured. The time is always put on the horizontal axis and the variable being measured is on the vertical axis. In order to make the changes over time easier to see, a time plot usually connects the data points by line.

The following are two time plots of the LA rainfall data, one without lines connecting the data and one with lines connecting the points. The two time plots are created in Excel. The time in the horizontal axis is the fiscal year (July 1 to June 30). The first point lies above 1877 on the fiscal year scale at height 21.26 inches. The last point lies above the year 2008 at height 9.08 inches.

The point in the upper right corner lies above the fiscal year 2004 at height 37.96 inches and is the second wettest season in the plot. The dryest season is the point above the year 2006 at height 3.21 inches.

For comparison, we also present the histogram shown in the previous post. 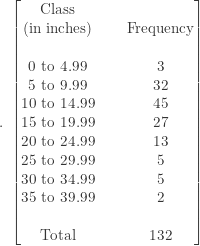 Another observation is that there seem to be no trend effect over time. For example, there is no clear increasing trend over time (nor a decreasing trend). The data points in the time plots are falling and rising, but there are no clear upward (or downward) trendlines that can be drawn to describe the seemingly random pattern of points. The time plots indicate that the seasonal rainfall amounts in Los Angeles deviate from the mean in a random pattern. Overall, the time plots exhibit a highly stable pattern of seasonal rainfall rainfall data.