A Student’s View of the Normal Distribution

In my teaching, I always strive to encourage students to look at statistics from a practical point of view. In a recent class period covering the normal distribution, I indicated that data values more than 3 standard deviations away from the mean are rare. The odds for seeing such data points are about 3 in 1,000. After class, a student came up to me and said that she understood the lecture except the things I said about 3 out of 1,000. She did not know what to make of it.

To make it even easier to see, let’s say the heights of young adult males follow a normal distribution with mean = 69 inches and standard deviation = 3 inches. Approximately 3,000 out of one million young adult males are either 9 or more inches taller than 69 inches (over 6 feet 6 inches) or 9 or more inches shorter than 69 inches (less than 5 feet). Since the bell curve is symmetrical, about 1,500 out of one million are taller than 6 feet 6 inches.

To look at this visually, the following is a bell curve describing the heights of the young adult males. Note that the bell curve ranges from about 55 inches to 80 inches. But most of the area under the bell curve is from 60 to about 78 inches. 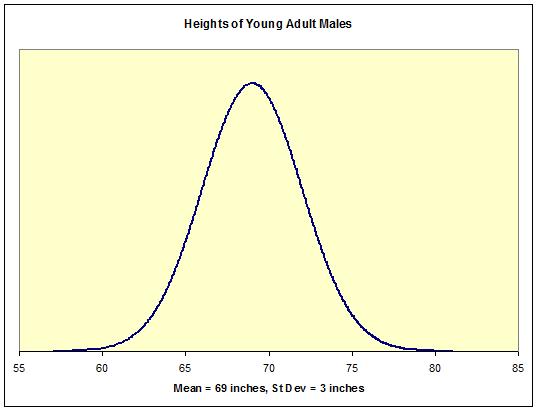 In my experience, many students have no problem reciting the empirical rule (reciting the three sentences about 1, 2, and 3 standard deviations). Some of them have a hard time applying it, especially using it as a quick gauge of the significance of data. I think understanding it within a practical context should make it easier to do so. I essentiall gave the same explanation to my student, which she thought was helpful.

3 Responses to A Student’s View of the Normal Distribution