The price of gas you pay at the pump is influenced by many factors. One such factor is the price of crude oil in the international petroleum market, which can be highly dependent on global macroeconomic conditions. Why don’t we let probability determine the price of gas? We discuss here an experiment that generate gas prices using random chance. The goal of this experiment is to shed some light on some probability concepts such as central limit theorem, law of large numbers, and the sampling distribution of the sample mean. These concepts are difficult concepts for students in an introductory statistics class. We hope that the examples shown here will be of help to these students.

We came across the idea for this example in [1], which devotes only one page to the intriguing idea of random gas prices (on page 722). We took the idea and added our own simulations and observations to make the example more accessible.

Down the street is another gas station called 2-Dice Gas Station. The price you pay there is determined by the average of two dice. For example, if the roll of two dice results in 3 and 5, the price per gallon is $4.

The possibility of paying $1 per gallon is certainly attractive for customers. On the other hand, paying $6 per gallon is not so desirable. How likely will customers buy gas with these extreme prices? How likely will they pay in the middle price range, say between $3 and $4? In other words, what is the probability distribution of the gas prices in these n-Dice Gas Stations? Another question is: is there any difference between the gas prices in the 1-Die Gas Station and the 2-Dice Gas Station and the other higher dice gas stations? If the number of dice increases, what will happen to the probability distribution of the gas prices?

One way to look into the above questions is to generate gas prices by rolling dice. After recording the rolls of the dice, we can use graphs and numerical summaries to look for patterns. Instead of actually rolling dice, we simulate the rolling of dice in an Excel spreadsheet. We simulate 10,000 gas purchases in each of following gas stations:

How Gas Prices are Simulated

We use the function

in Excel to simulate rolls of dice. Here’s how a roll of a die is simulated. The

, it is considered a roll of a die that produces a

, it is considered a roll of a die that produces a

, and so on. The following rule describes how a random number is assigned a value of the die: 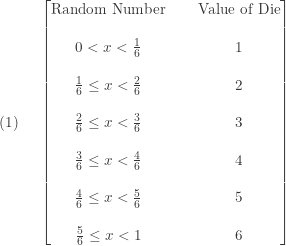 By going through the process in the above paragraphs, 10,000 gas prices are simulated for each gas station indicated in

Looking at the Simulated Gas Prices Graphically
We summarized the 10,000 gas prices in each gas station into a frequency distribution and a histogram. Watch the progression of the histograms from 1-Die, 2-Dice, and all the way to 50-Dice.

Note that all the above histograms center at about $3.50, and that the spread is getting smaller as the number of dice increases. To get a sense that the spread is getting smaller, note in the histograms (as well as frequency distributions) that the min and max gas prices for 1-Die, 2-Dice, 3-Dice and 4-Dice are $1 and $6, respectively. However, the price range for the higher dice gas stations is smaller. For example, the price ranges are $1.70 to $5.30 (for 10-Dice), $2.33 to $4.60 (30-Dice) and $2.60 to $4.64 (50-Dice). So in these higher dice stations, very cheap gas (e.g. $1) and very expensive gas (e.g. $6) are not possible. To confirm what we see, look at the following table of numerical summaries, that are calculated using the 10,000 simulated gas prices for each gas station.

The theoretical mean and standard deviation for the 1-Die gas prices are $3.50 and 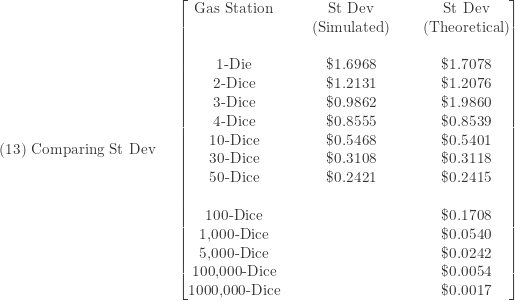 Looking at the Long Run Average in 1-Die Gas Station

Another observation we like to make is that the average gas price is not predictable and stable when we only use a small number of simulated prices. For example, if we only simulate 10 gas prices for the 1-Die Gas station, will the average of these 10 prices be close to the theoretical $3.50? If we increase the size of the simulations to 100, what will the average be? If the number of the simulations keeps increasing, what will the mean gas price be like? The answer lies in looking at the partial averages, i.e. the average of the first 10 gas prices, the first 100 gas prices and so on for the 1-Die Gas Station. We can look at the how the partial average progresses. 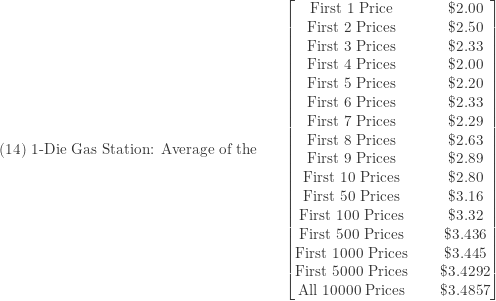 is an accurate estimate of the population mean $3.50 only when more an more gas prices are added in the mix (i.e. as the sample size increases). This remarkable fact is called the law of large numbers.

The following two figures show how the sample mean

of a random sample of gas prices from the 1-Die Gas Station changes as we add more prices to the sample. Figure 15a shows how the sample mean

varies for the first 100 simulated gas prices. Figure 15b shows the variation of

Figure 15a shows that within the first 30 prices or so, the sample mean

fluctuates wildly under the horizontal line at $3.50. The sample mean

becomes more stable as the sample size increases. Figure 15b shows that over the entire 10,000 simulated gas prices, the sample mean

is stable and predictable. Eventually the sample mean

gets close to the population mean

and settles down at that line.

Figures 15a and 15b show the behavior of

1. The Sample Mean As A Random Variable. Given a sample of data values, the sample mean

will produce a different value. Take the gas prices from the 3-Dice Gas Station listed in table

as an example. The first simulation produced the sample

. The second sample is

and the mean is

. As the three dice are rolled again, another sample is produced and the sample mean

will be a different value. So the sample mean

is not a static quantity. Because the samples are determined by random chance, the value of

cannot be predicted in advance with certainty. Hence the sample mean

is a random variable.

2. The Central Limit Theorem. Once we understand that the sample mean

is a random variable (that it varies based on random chance), the next question is: what is the probability distribution of the sample mean

? With respect to the n-Dice Gas Stations, how are the gas prices distributed?

becomes more and more normal as the sample size increases. This means that we can use normal distribution to determine probability statements about the sample mean

whenever the sample size

Because we start out with a symmetric histogram, it does not take a large increase in the number of dice for the sample mean to become normal. Note that the 4-Dice gas prices produce a histogram that looks sufficiently normal. Thus if the underlying distribution is symmetric (but not bell-shaped), increasing the sample mean of sample size to 4 or 5 will have a distribution that is adequately normal (like the example of n-Dice Gas Stations discussed here).

However, if the underlying distribution is skewed, it will take a larger increase of the sample size to get a distribution that is close to normal (usually increasing to

3. The Mean and Standard Deviation of Sample Mean

The above histograms (Figure 4b to Figure 10b) center at $3.50. However, the spread of the histograms gets smaller as the number of dice increase (also see Table

). Thus the gas prices hover around $3.50 no matter which n-Dice Gas Station you are in. The standard deviation of the gas prices gets smaller and smaller according to the Formula

and the theoretical standard deviation of this population is

according to the Formula

In general, the sampling distribution of the sample mean

is centered at the population mean

and is less spread out that the distribution of the individual population values. If

is the mean of the individual population values and

4. The Law of Large Numbers. If you buy gas from the 1-Die Gas Station for only 1 time, the price you pay may be $1 if you are lucky. However, in the long run, the overall average price per gallon will settle near $3.50. This is the essence of the law of large numbers. In the long run, the owner can expect that the average price over all the purchases to be $3.50. The long run business results in the 1-Die Gas Station is stable and predictable (as long as customers keep coming back to buy gas of course).

In fact, the law of large numbers is the business model of the casino. When a gambler makes bets, the short run results are unpredictable. The gambler may get lucky and win a few bets. However, the long run average (over thousands or tens of thousands of bets for example) will be very stable and predictable for the casino. For example, the game of roulette gives the casino an edge of 5.26%. Over a large number of bets at the roulette table, the casino can expect to make 5.26 cents in profit for each $1 in wager.

The following are the statements of the probability concepts discussed in this post.

To read more about the probability concepts discussed here, you can consult your favorite statistics texts or see [2] or [3].