The probability of breaking the bank

There had been casinos going out of business for sure. But those bankruptcies were the results of business failures, e.g. not attracting enough customers to come into the casino, and were not for the results of gamblers breaking the bank. The business model of the casino is based on a built-in advantage called the house edge, which in mathematical term is the the casino’s average profit from a player’s bet. The house edge differs for different games but is always positive (e.g. the house edge for the game of roulette is 5.26%).

As long as a casino has a steady stream of customers willing to plunk down cash to play various gambling games, the casino will always win. For example, for every $100 bet in the game of roulette, the house wins on average $5.26. This post discusses a problem called gambler’s ruin that will further highlight a gambler’s dim prospect against the house.

The problem of gambler’s ruin features two players A and B, betting on the outcome of a coin. At the start of the game, there are

units of wealth between the two players, with player A owning

units and player B owning

units of wealth? What is the probability that player B ends up with all the

If the total wealth

units of wealth is the probability of ruin for player A.

The answer to the problem of gambler’s ruin will produce two formulas that can tell us the likelihood of player A winning, and the probability of player A losing everything.

The answers had been worked out in a recent post in a companion blog on probability. In this post, we discuss the answers and make some remarks on gambling. We first discuss the case for even odds and then the general case.

units of wealth and player B owns

units at the beginning. The long run probability of player A winning all the units is

. The long run probability of player B winning all the units is

Uneven Odds. Suppose that player A and player B bet on tosses of a coin such that the probability of tossing a head is

. Suppose further that player A owns

units of wealth and player B owns

units at the beginning. The long run probability of player A winning all the units is

. The long run probability of player B winning all the units is

First, let’s unpack these formulas. Let’s say the coin has a slight bias with the probability of a head being 0.49. Then

In the even odds case, player A would have a 10% chance of winning everything (by owning 10% of the total initial wealth). With the house having just a 1% edge, the chance for winning everything is now 0.917%, less than 1% chance!

To calculate the probability of player B winning everything, plug into the ratio

in the numerator is always raised to the initial wealth of the player being calculated. In the example of

can be calculated by

, starting with the fair game of

= 0.49 does not correspond to an actual casino game. It is used to demonstrate what happen when the house has a 1% edge. The last two columns are for the game of craps and the game of roulette. 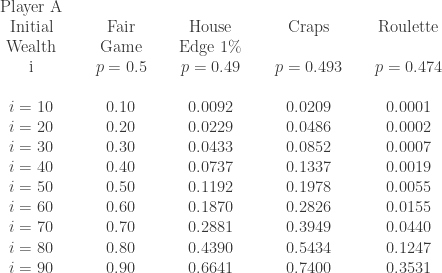 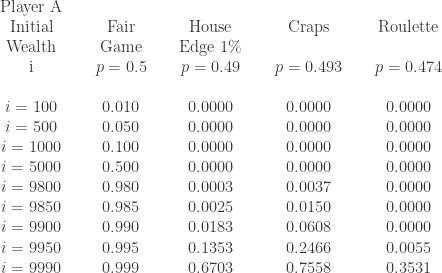 are critical to the eventual success or ruin for player A. Let’s look at the row for

In Table 1, the same pattern for

= 50 appears for the other initial positions as well. As

Table 2, with the total wealth of 10,000 units, is designed to more realistically reflect the gambling situation of a typical gambler versus the house. With the higher combined wealth, the effect of

For example, in table 2, if the initial wealth of player A is 100, the probability of winning at the game of roulette is zero. This means that eventually player A will lose the 100 units. But the results in Table 2 do not tell us on average how many plays of the game have to happen before eventual ruin. If the gambler is lucky, he or she may be able to rack up some winnings for a period of time before getting to the point of ruin. One thing is clear. When the game is unfair (to the gambler), there is a virtually certain chance that the gambler will lose all the money that he or she bring into the casino. This is essentially the story told by the formulas discussed here.

3 Responses to The probability of breaking the bank